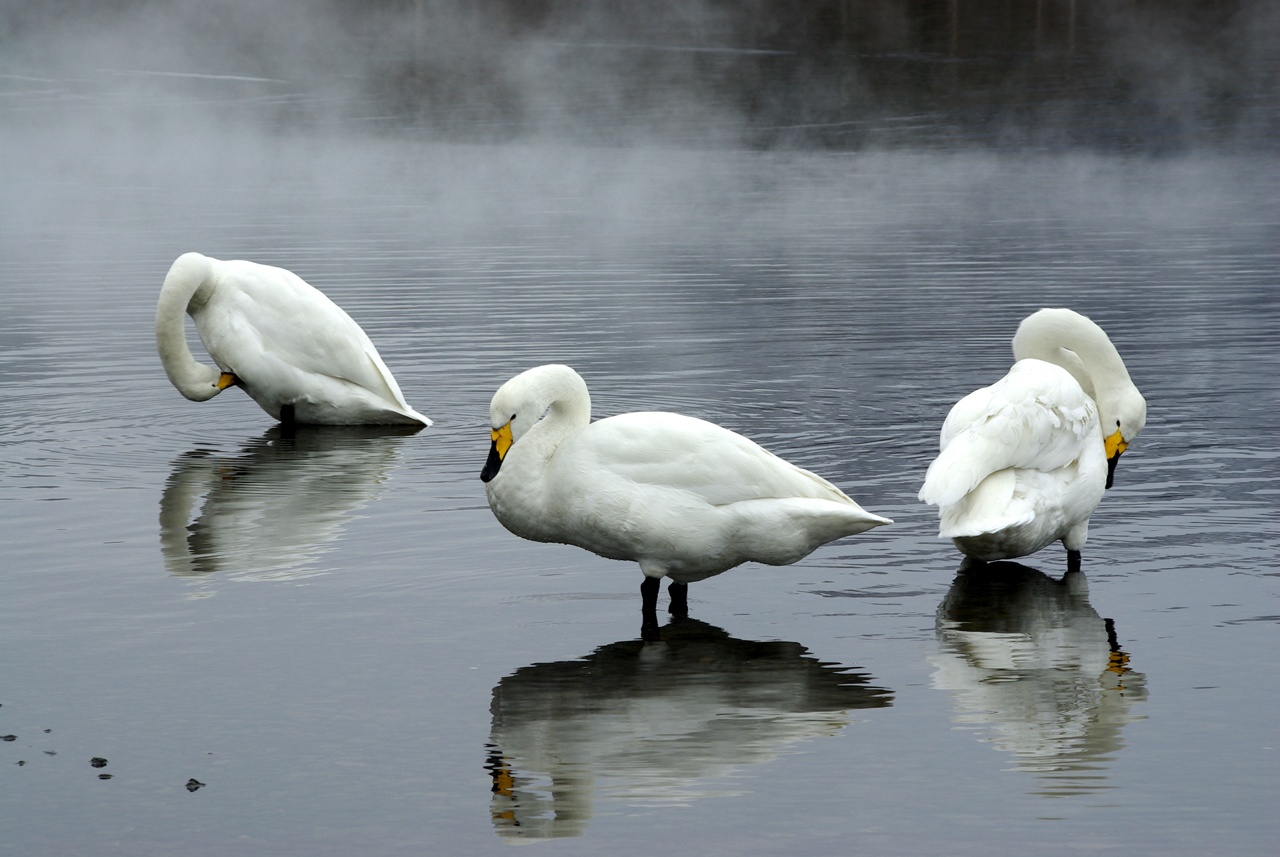 In the northern lowlands, between the villages of Hvammstangi and Blonduos, there is an area of lagoons, lakes and marshlands, offering a variety of waterfowl. In spring, hundreds of whooper swans feed in the lagoons and on the flooded marshes while waiting for the ice on the highland lakes to thaw. Gyr falcons nest on cliffs near the lagoon of Vesturhop practically every year.

The wide and fertile Skagafjordur District also has a varied avifauna and this is the main resting place for the barnacle goose on its way to its nesting grounds in Greenland. On the delta of the river Heradsvotn, near the town Saudarkrokur, there is an extremely good area which is often overlooked by bird-watchers, but which holds almost all the duck species found in Iceland. Besides the common waders, such as dunlins and whimbrels, there are also considerable numbers of black-tailed godwits.

The high, rocky Drangey Island on the bay has numerous cliff birds and here, as on all the cliffs in northern Iceland, Brünnich’s guillemots outnumber the ordinary guillemots. A pair of gyr falcons nest almost every year in Drangey. The Eyjafiord District has many river deltas with much the same species as in the Skagafiord region. Common gulls occur here in a number of places among black-headed gulls.

In Akureyri, the principal town of the north, redwings and redpolls are very common, and this is the only place in the country where fieldfares have nested several times, although not as yet regularly.

The Hrisey Island has an exceptionally large population of ptarmigans. There are regular ferry and flight connections between Akureyri and the Grimsey Island on the polar circle. Among the bird species are occasional little auks nesting. Wrens are common in the forest Vaglaskogur, one of the largest birch woods in the country, about 17 km east of Akureyri. The lowlands beyond the Skjalfandi Bay form the best ptarmigan country in Iceland.

The Lake Myvatn area, particularly renowned for its waterfowl, provides the main breeding grounds of all the 16 species of ducks which nest in Iceland. The delta of River Laxa has a few large eider colonies, the river itself has harlequins, goosanders and Barrow’s goldeneyes, and the lake is an veritable paradise for ducks. The most common species on Lake Myvatn are scaups and tufted ducks which appear in almost equal numbers. Other common species are Barrow’s goldeneyes, common scoters, long-tailed ducks and red-breasted mergansers. widgeons, gadwalls and teals are the most numerous of the dabbling or surface-feeding ducks, and mallards, pintails and shovelers are less common. Goldeneyes and American widgeons are recorded annually in the Lake Myvatn area, although there is no evidence of nesting.

There are other birds too, including several hundred slavonian grebes and many land birds. Nowhere else in Iceland are snipes and red-necked phalaropes more abundant. Several pairs of gyr falcons and merlins nest in the mountains and in the larger lava stacks in the area. Merlins are also widely distributed throughout the country.

The Oxarfjordur District has another good waterfowl lake, Vikingavatn, sometimes called “The Small Lake Myvatn”, because almost all the same species of ducks are also found there in large numbers. The extensive, sandy delta of River Jokulsa a Fjollum is the nesting grounds for a few hundred pairs of great skuas, the only colony in the north. On Raudinupur, a promontory in the northeastern corner of the mouth of the Oxarfiord Bay, there is a small colony of gannets. Off the shore of this part of the country, long-tailed- and pomarine skuas are occasionally seen on migration.