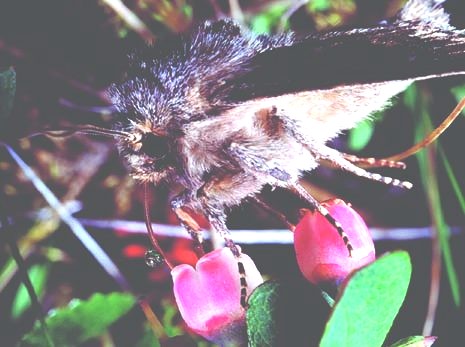 Two winged flies
Within this family are about 380 species in Iceland. The Mosquitoes (Culicidae) do not exist in Iceland or the Faroe Islands, the only countries in the world, where they are not found. The reason probably is the changeable weather. Among the most common ones are: The common house-fly (Musca domestica), The lesser house-fly (Fannia cannicularis), The crane-fly (Tupulidae), The blow-fly (Calliphora; at least 4 species), The dung-fly, *the black fly (Simulidae; 4 species) and **The Chironomid (Chironomidae).

*The black fly is an American species and the only one, which bites people and other mammals. Only the females bite and the bites swell a bit and itch. The female species of Simulium aureum and Simulium vernum only bite birds. The Cnephia ursinum thrives of flowers, as do the males of all the other species.

**The chironomids are the most common species of lake-oriented insects in Iceland. Altogether around 50 species have been spotted in Iceland, whereas about 1000 species can be found on lakes and rivers and in bogs elsewhere in the world. The most common species in Iceland are: The Chironnomidae islandicus (about 100.000 larvae have been estimated per one m² on Lake Myvatn) is a very important link in the food chain of lake char and brown trout. The Tanubarsus gracilentus. The Orthocladiinae is common where there is abundance of algae and flowers.

Hover-flies
These flies, Syrphidae, are decorated with various coloured stripes and are the size of the blow-fly. They mostly remain close to flowers and can hover like a helicopter. About 30 species have been spotted in Iceland and the most prominent species is the Cyrphus torvus.

Hymenopterants
About 260 species of are found in Iceland, and most of them are parasitic. The *bee (Apidae), the **bumble bee (Bombus) and the ***social wasp (Vespidae).

*The bee is a very social species; about 80.000 of them occupy one hive. The majority, females, collects honey. They require 50 trips for 1 gr., and about 15 million flying hours to collect one kg. The males are totally idle. The most common species, Aphis mellifera, does not exist in Iceland. Bee breeding has been tried somewhat successfully with Melitta urbancic.

**The bumblebee. Three species have been discovered in Iceland. Only one of them has been a permanent species from the time of settlement (Bombus jonellus), and the remaining two, Bombus hortornum and Bombus lucorum, were carried by container freighters to the country.

***The social wasp was not discovered in Iceland until in the seventies. Three species have been found, two of them of the Vespula Family. They mostly build their hives in inhabited areas and the Dolichovespula norvegica is the most common one all over the country.