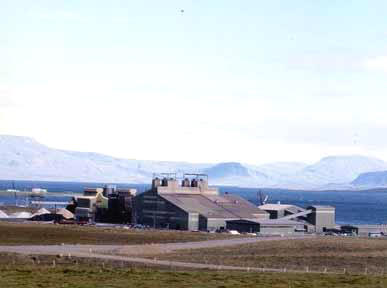 Elkem Iceland, the Ferro Alloy Factory started its operation in 1979. The Icelandic government held majority ownership with the Elkem-Spiekerverket of Norway and Sumitomo in Japan until it sold its shares. Most of the workers of the factory live in the town Akranes and its surroundings.

Agricultural activities in the area have diminished considerably since the factory started. The harbour of Grundartangi was built at the same time as the factory by the communities on the Whale Bay. Nordic Aluminium (Century Aluminium) started its operation in 1998 with an average capacity of 60.000 tons per annum. In the year 2000 its capacity was increased by 30.000 tons. It also uses the harbour to receive raw materials (bauxite) and ship its products. The smelter changed ownership in the first half of 2004.

The opening of the Whale Bay Tunnel in June 1998 accelerated the development of Town Akranes and the neighbouring communities.