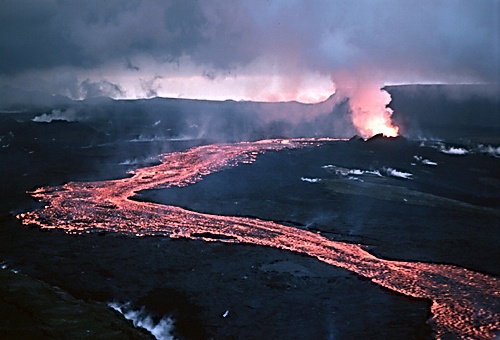 The events that have taken place in the Krafla caldera and on the Krafla fissure swarm during 1975-84 are, so far, a striking repetition of what happened during the “The Myvatn Fires” in the 1720’s.

The current activity has been termed a rifting episode. It started with increasing seismic activity in the Krafla caldera during the second half 1975, culminating with an earthquake swarm, ground fissuring, and a small lava eruption just north of the hyaloclastite ridge Mt Leirhnjukur on Dec. 20 1975. Long term gravity changes, tilt variations and geodetic measurements across the axial zones in NE-Iceland are consistent with crustal separation occurring as slow continuous stretching during quiet periods and episodic rifting with up to several m of extension occurring within a period of a few years. During an active episode, magma ascends below the central volcano and is stored in shallow magma chambers at 3 km depth. At Krafla the maximum inflow rate of magma was 5 m/s, a figure based on the rate and area of inflation. During the short deflation/rifting events magma was intruded from the shallow magma chambers into the fissure swarm along laterally injecting dykes.

As a result the tensional stress is gradually released and the accompanying magmatic changes from primarily dyke injection in the early stage of the rifting episode to lava outflow at a later stage. These events were accompanied by volcanic tremor, earthquakes swarms, vertical ground movements and widening of one part or other of the fissure swarm and increased geothermal activity. Some 17 volcano-tectonic events of the kind described, have occurred since December 1975, the last in September 1984. Since 1980 these events were accompanied by extrusion of lava.

The longer lasting eruptions started as long fissures but the activity concentrated after the first day on a short segment where sizeable scoria cones grew. After the Sept. 1984 eruption the total area covered by the lavas is 36 km and the volume about 0.25-0.3 km³. The widening of the fissure swarm amounts to a maximum of 9 m at the northern margin of the Krafla caldera and decreasing towards north and south. The subsidence of the central part of the swarm amounts to 2-6 m but on both sides the land has contracted and risen somewhat.

Following the eruption of September 1984 the Krafla magma chamber inflated again eventually fully recovering previous elevation. During 1989-92 land subsided at 5 cm/yr but during 1992-95 by 2.4 cm/yr.