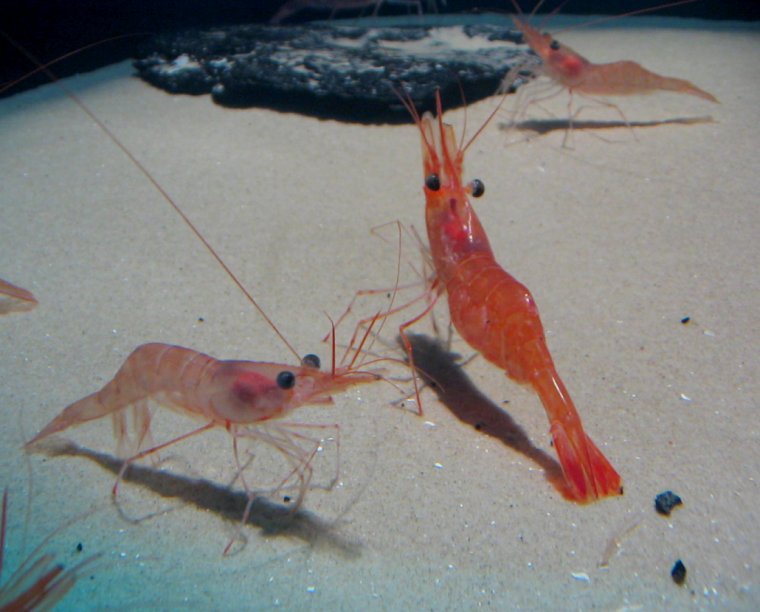 The northern shrimp (Lat. Pandalus borealis) is one of the animals called crustaceans (crabs, lobsters, etc.), which have hard outer shells, jointed legs, and breath through gills, since most of them are aquatic. This species is pale scarlet, has a pair of compound eyes, and gets 16 cm long.

It is a good swimmer, like so many of the sam family. It used appendages on the tail (pleopods) to paddle with great agility. It is found in the Pacific and Atlantic Oceans. In the Atlantic all the way from the Gulf of Main, through the Davis Strait, through East Greenland, and the Norhteast Atlantic, including the Norwegian, Barents and North Seas. In the Pacific, it extends from Japanese waters to the Bering Sea, and from the Aleutian Islands to the Washington-Oregon coast.

Canadian shrimp grounds in the Atlantic are in the Gulf of St. Lawrence, on the Scotian Shelf, in the Labrador Channels, and the Davis Strait. Where the greatest populations of the northern shrimp are to be found, the temperatures of the sea are between 2°C and 6°C. Sometime these temperature zones lie no deeper than 180 m. There also seems to be relationship between depth and size, i.e. larger at greater depths.

The northern shrimp migrates both horizontally and vertically. The former is seasonal and occurs when females seek shallower waters for spawning, after which the concentrations disperse again. The latter occurs on a daily basis, probably in the search of small palagic crustaceans or krill. It is an importan link in the food chain for many fish species, especially cod. The diminishing cod stocks have lead to increase in the shrimp stocks. It can be found at depths between 50 and 700 metres and it prefers soft, muddy ocian floors to hard ones, where it is sometimes found.

The main concentrations of northern shrimp in Icelandic waters are found off the northwest, north and northeast coasts. It is bisexual. First it reaches male puberty, but then changes to female. Sometimes, when growth conditions are good, it reaches puberty as female and skips the male stage. The gender of the shrimp can be detected by the shape of the inner flap of the first pair of swimmers.