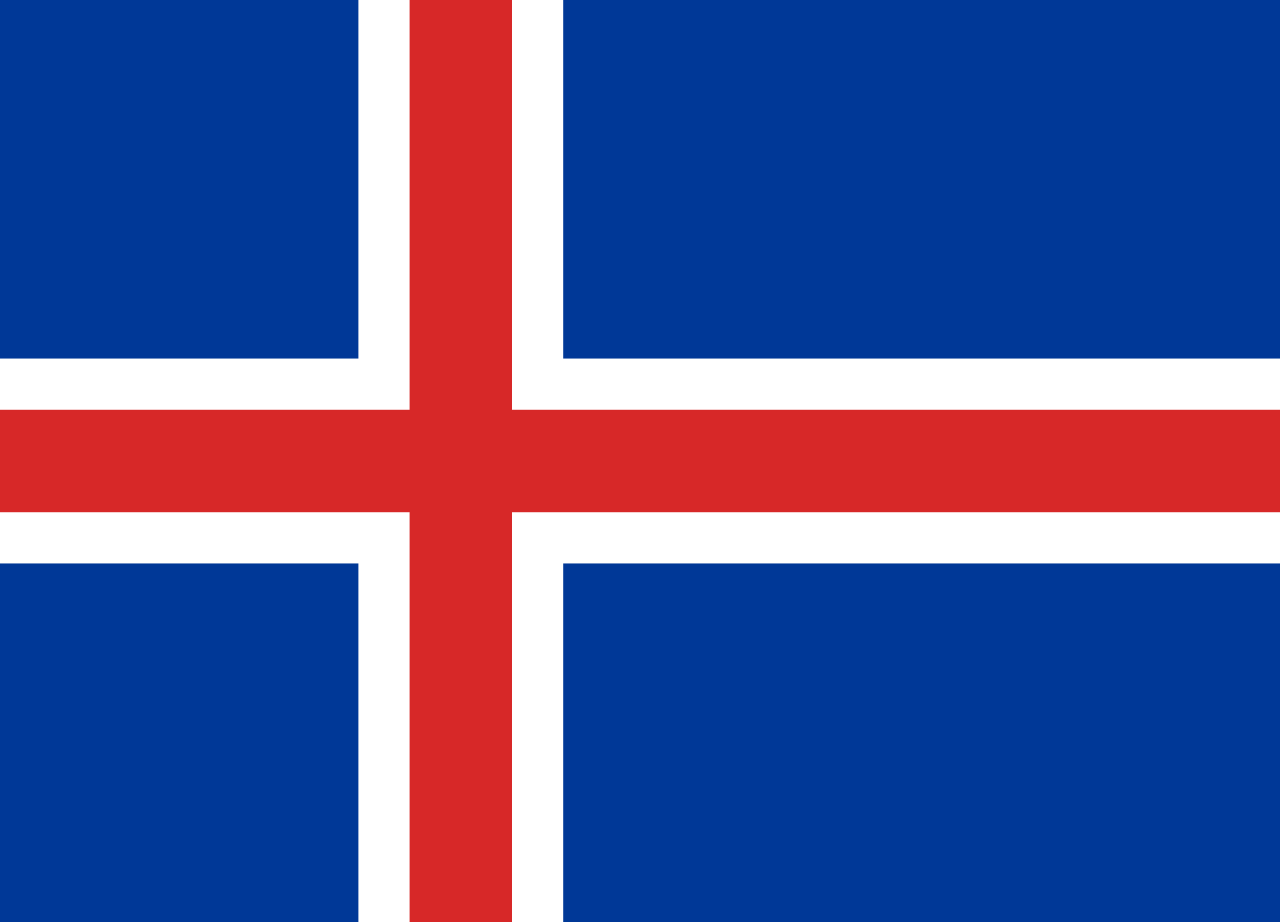 The national flag of Iceland is a sky-blue rectangle with a snow-white cross and a fiery-red cross in the middle of the white cross. The proportional figures for the width and length of the rectangle are 18:25. The arms of the crosses extend entirely to the edges of the flag. The width of the white cross is 2/9 and that of the red cross 1/9 of the width of the flag. The blue field is thus divided into four rectangles, the two nearest to the flagpole being squares (equilateral rectangles), the other two being of the same width as the squares, but twice as long.

The split flag (swallow-tail flag) is used by the Government, the Althingi, other official institutions, and representatives of the Foreign Service abroad, including honorary consuls. The split-flag differs from the ordinary national flag in the following: The outer blue fields are three times as long as the squares near the flagpole. It has a slit which is cut in straight diagonal lines from the outer corners of the flag towards its horizontal median; these lines cut the inner horizontal edge of the outer rectangles at a distance from their inner vertical edge which is 3/7 of the length of these rectangles; however, the diagonal lines do not extend fully to the horizontal median of the flag; where they meet the arm of the red cross it is cut athwart by a straight line.

Other types of flags

Other types of flag are the flag of the President of Iceland, the post- and telegraph flag and the customs flag. All three are split-flags with different signs on them.

The colours of the flag

The colours are based on the Scotdic textile colour codification as follows:

Consuls may acquire samples of the flag colours from an Icelandic embassy or the Ministry for Foreign Affairs.

Use of the Icelandic flag by consuls. See Article 44 (6).

Handling of the flag

Detailed stipulations regarding the handling of the Icelandic flag are set out in a booklet published by the Office of the Prime Minister in 1991. Consuls should take note of the following rules and endeavour to observe them when applicable.

(a) Proportion between flag and pole. When a ground flagpole is used, its length should preferably be five times the width of the flag. If the pole is on a rooftop, the proportions should be 1:3 and if it is on the side of a house at an angle, 1:2,5.
(b) Flag time. The flag should not be raised before seven O’clock in the morning. It should normally be lowered at sunset and should never be kept hoisted after midnight.
(c) Flying the flag at half-mast. When the flag is to be flown at half-mast, it should first be raised to full mast and then lowered until 1/3 of the pole is above the upper edge of the flag. When the flag is flown at half-mast on the occasion of a funeral it should be raised to the top of the flagpole when the funeral is over and flown until evening in honour of the deceased.
(d) Various rules. Always when the flag is raised or lowered care should be taken not to let it touch the ground.
i. The flag cord should be stretched so that the edge of the flag lies close to the pole;
ii. Two or more flags should never be flown on the same pole.
iii. If the Icelandic flag is among flags of other nationalities, it should be to the farthest left;
iv. If the flag is hung on a wall, it should be fully extended, and the smaller rectangles should turn upwards or to the left;
v. When the flag is used beside a rostrum or table, it should always be to the left of the speaker, seen from the audience, or on both sides if there are two flags;
vi. The flag may not be used on a rostrum, as a tablecloth or a floor mat, or to cover a statue which is about to be presented;
vii. When a coffin is covered with the flag, the cross should be towards the head;
viii. The flag should always be stored in a safe place;
ix. It is forbidden to fly a flag which is faded, dirty, frayed or damaged in any other way. Such a flag should be repaired without delay or else destroyed by burning.

Disrespect to the flag