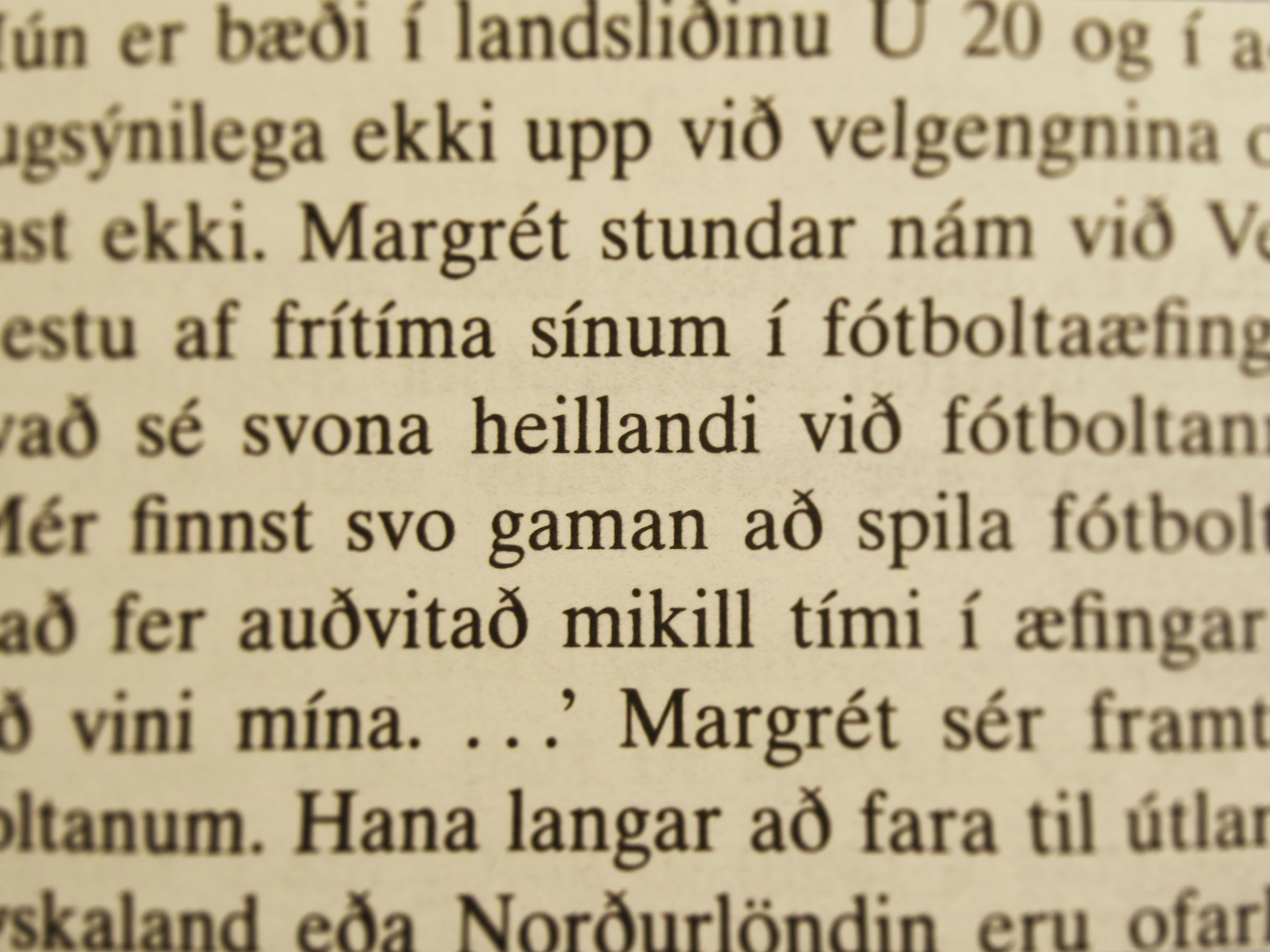 The origin of the Icelandic language

Iceland was settled in the period A.D. 870-930. Most of the settlers came from Norway, especially Western Norway, a few of them from Sweden and some from the British Isles, including Ireland. The language, which came to prevail in Iceland, was that of the people of Western Norway. It is commonly agreed that a considerable part of the immigrants was of Celtic stock (estimates, based partly on physical-anthropological studies, vary from 10 to 30 percent). However, the Icelandic language shows only insignificant traces of Celtic influence. The only evidence is a few Celtic loan words and a few personal names and place-names.

Icelandic and Norwegian did not become markedly different until the fourteenth century. From then onwards the two languages became increasingly different. This was for the most part due to changes in the Norwegian language, which had in some cases begun earlier in Danish and Swedish, while Icelandic resisted change, no doubt thanks in part to the rich Icelandic literature of the 12th and following centuries. Resistance to change is one of the characteristics of the Icelandic language, which explains the fact that a twelfth-century text is still easy to read for a modern Icelander. However, Icelandic has undergone considerable change in its phonetics. Another characteristic of the language is its uniformity, i.e. absence of dialects.

Like the old Indo-European languages, Icelandic has a complicated grammar: Nouns are inflected in four cases (nominative, accusative, dative and genitive) and in two numbers (singular, plural). The same is true of most pronouns and adjectives, including the definite article and the ordinal and the first four of the cardinal numerals: these are also inflected in three genders, while each noun is intrinsically either masculine, feminine or neuter. Most adjectives and some adverbs have three degrees of comparison and most adjectives have two types of inflection, called strong and weak, in the positive and superlative.

In the late eighteenth century, language purism started to gain noticeable ground in Iceland and since the early nineteenth century, language purism has been the linguistic policy in the country. Instead of adopting foreign words for new concepts, new words (neologisms) are coined or old words revived and given a new meaning. As examples may be mentioned simi for telephone, tolva for computer, thota for jet, hljodfrar for supersonic and geimfar for spacecraft. The Icelandic language committee is an advisory institution which is to “guide government agencies and the general public in matters of language on a scholarly basis.”

Icelandic in other countries

There are Icelandic language communities in North America. They came into being because of emigration from Iceland to Canada and the United States in the last quarter of the nineteenth and the beginning of the twentieth centuries. The earliest of these settlements was established in Utah in 1855, but it was around 1870 that continuous emigration began. In 1870, a small Icelandic settlement was established on Washington Island in Lake Michigan. Later, an Icelandic settlement arose in North Dakota.

In 1875, the first Icelandic settlement was established in Canada, on the Western shore of Lake Winnipeg (“New Iceland”). Such settlements arose also in Alberta, Saskatchewan, and British Columbia. Until the end of the 20th century, tens of thousands of people in these areas still could speak the Icelandic language. For further details regarding the Icelandic language, see the publication Iceland 1986.

As in so many other countries, Latin script followed in the wake of the adoption of Christianity in Iceland. This took place in the year 1000 A.D., by an act of the Althingi. (Although the oldest Icelandic manuscripts preserved are from the second half of the twelfth century, it is likely that the first attempts at adapting the Latin script to the Icelandic language were begun not long after the conversion).

Today, the alphabet of the Icelandic language is the same as that of English, with the following exceptions:

However, the accent mark does not mean that the vowel is stressed, but marks it as different in quality from the unaccented vowel.

The word Viking is a collective designation of Nordic peoples, Danes, Swedes, Norwegians and Icelanders, who ranged abroad during a period of dynamic Scandinavian expansion in the Middle Ages, from about AD 800 to 1100. Called the Viking Age.
Accordingly, Icelandic languages is more or less related to all these languages and are spoking to day as since Iceland was settled in the period A.D. 870-930