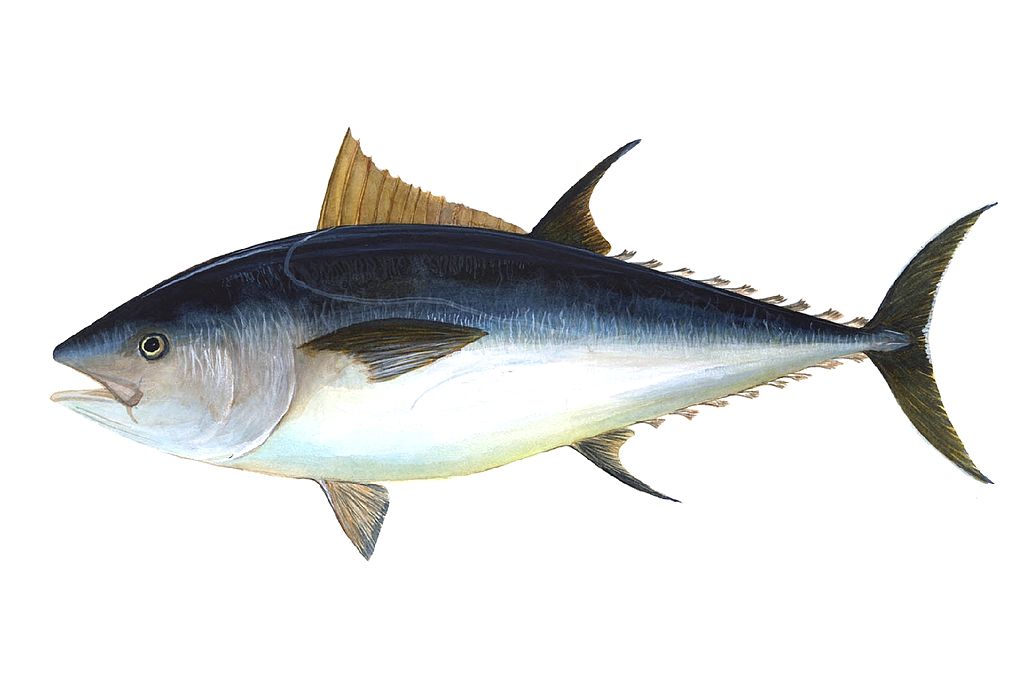 The northern bluefin tuna (giant gluefin tuna – Lat. Thunnus thynnus) inhabits the West and East Atlantic, into the Mediterranean and the Black Sea. This species is now reared commercially off the coasts of Japan. It has a life span of 30 years. It has been overexploited and its average size nowadays is about one m long and weights about 35 kg. The largest fish was caught off Nove Scotia weighing 680 kg. The maximum length is 4 m. It is a popular fish among sports fishermen, who use heavy-duty rods and reels.

The bluefin tuna was called common thunny. In Australia, New Zealand, and the Fiji Islands another species is fished, but sold under the name of the northern bluefin tuna. Commercial fishermen use purse seine gear. Commercially it is an important species, for sushi especially. This importance has led to this dangerous overexploitation of the species, which is considered critically endangered. One northern bluefin tuna sometimes fetches 100.000 US$ on the fish markets in Japan. Tuna steaks and canned tuna involves other species.

The northern bluefin tuna is sigar-shaped and quite thick, the head conical and the mouth large. It feeds off small fish, i.e. sardines, herring, mackerel, squid, and crustaceans. The upper body is dark blue and the lower is grey. Its pectoral fins are relatively short compared to other tuna species. The liver is covered with blood vessels (striated), whereas other tuna species have not or small numbers along the edges.

The Atlantic stocks of this species have declined by almost 90% since the 1970s. This species has inhabited Icelandic waters for centuries, but has not been exploited commercially.