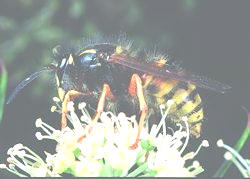 Beetles (Coleoptera)
About 240 species are endemic, 150 in nature, 30 indoors and 60 are vagrants. *The row beetle (Staphylinitae) and **ground beetle (Carabidae) are the most common.

Moths and butterflies (Lepitoptera)
About 100 species have been spotted, 60 endemic (7 indoors) and the rest vagrants. All the endemic species are moths. Butterflies are non-existent (about 400 species in Western Europe). Moths are monotonously coloured.

Bugs (Hemiptera)
About 80 species have been spotted in Iceland, i.e. plant louse (Aphis).

Spring tails (Collembola)
About 80 species have been found in Iceland. They are soil bugs, important for the decomposition of the soil.