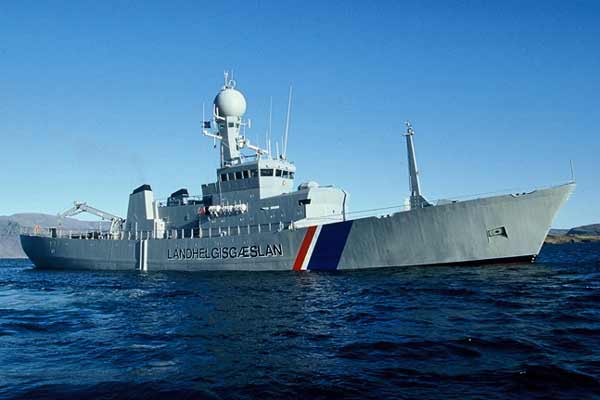 In 1926, eight years after Iceland regained its independence, the Icelandic Coast Guard was formally established, having at that time been in existence de facto for some years using chartered vessels. It is a non-military service staffed with about 120 specially trained men, headed by a Director General, and is subordinated to the Ministry of Justice. The Coast Guard is a law enforcement force with the main task of ensuring that Icelandic and international rules of law are observed in Icelandic waters. The seas around the country that are under surveillance by the Coast Guard stretch 200 nautical miles out from base lines around the coast and cover about 758.000 square kilometres, or nearly 7,5 times the area of Iceland. Although policing the seas is the main task, the Coast Guard is charged with various other functions, the most important being rescue work, and helping those in trouble or distress at sea. The Coast Guard also performs hydrographical surveying and gives assistance to the local population in coastal areas when needed, undertakes lighthouse duties and responsibilities in the country’s civil defences.

The Coast Guard is responsible for the disposal of explosive devices entangled in fishing gear or that has washed ashore and is tasked to assist the police in defusing such devices when necessary. To carry out its varied tasks the Coast Guard uses specially built and specially equipped vessels, fixed-wing aircraft, and helicopters. The vessels are reinforced for navigation in ice, and have a helicopter hangar and platform. The vessels and helicopters are specially equipped for salvage and rescue work. All vessels are armed with one Bofors 40 mm cannon and carry hand weapons. The Coast Guard has (1995) one Fokker Friendship (F 27) aircraft, one Dauphin SA-365-N helicopter, one SA-350-B helicopter and took delivery of one Super Puma helicopter in June 1995. It has three vessels (Tyr, Aegir and Odinn) with displacement from 1.200 to 1.300 tons.