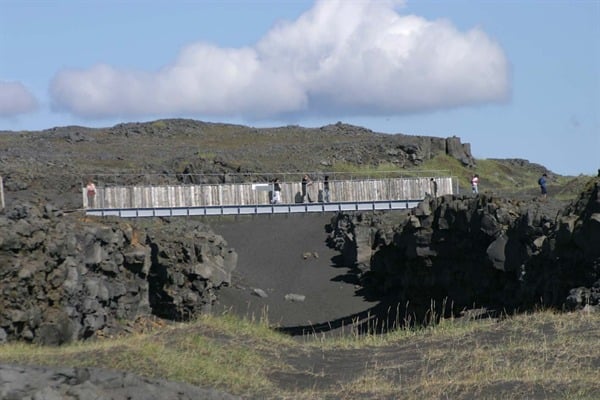 Plate Tectonics are a theory of global tectonics (geological structural deformations) that has served as a master key, in modern geology, for understanding the structure, history, and dynamics of the earth’s crust. The theory is based on the observation that the earth’s solid crust is broken up into about a dozen semi-rigid plates. The boundaries of these plates are zones of tectonic activity, where earthquakes and volcanic eruptions tend to occur.

Although the plate tectonics revolution in geological thought occurred only recently (in the 1960s and 1970s), the roots of the theory were established by earlier observation and deduction. In one such discovery, James Hall, a New York geologist, observed that sediments accumulated in mountain belts are at least ten times thicker than those in the continental interiors of the earth.

This planted the seeds for the later geosynclinal theory that continental crust grows by progressive additions that originate as ancient and folded geosynclines, hardened and consolidated into plates. This theory was well established by the 20th century. Another 19th-century discovery was that there was a mid-ocean ridge in the Atlantic Ocean; by the 1920s scientists had concluded that this ridge was continuous almost all the way round the world.

In the period 1908-1912, the German geologist Alfred Lothar Wegener proposed theories of continental drift and others, who recognized that continental plates rupture, drift apart, and eventually collide with each other. Such collisions crumple geosynclinal sediments, thus creating future mountain belts. Geophysical work on the earth’s density and observations by petrologists had previously shown that the earth’s crust consists of two quite different materials: sima, a silicon-magnesium rock, typically basalt, which is characteristic of oceanic crust; and sial, a silicon-aluminium rock, typically granite and characteristic of continental crust. Wegener thought that the sial continental plates sail across the sima ocean crust like icebergs in the ocean. This reasoning was fallacious, because the melting point of sima is higher than that of sial. Geologists subsequently discovered the so-called asthenosphere, a layer of relatively low strength in the earth’s mantle that underlies the crust at depths of 50 to 150 km (30 to 80 mi). First deduced hypothetically, it was later seismically demonstrated to be a low-velocity, plastic material capable of flow.

One of Wegener’s strongest arguments for continental drift was the geometric matching of continental margins, which he postulated had rifted apart. To support his theory, he pointed out that rock formations on opposite sides of the Atlantic Ocean—in Brazil and West Africa—match in age, type, and structure. Furthermore, they often contain fossils of terrestrial creatures that could not have swum from one continent to the other. These palaeontological arguments were among the most persuasive to many specialists, but they did not impress others (mostly geophysicists).

Wegener’s best examples of rifted continental borders, as mentioned, were along the two sides of the Atlantic Ocean. Sir Edward Crisp Bullard, in fact, tested their precise fitting by computer-based analyses and presented his results to the Royal Society of London: the fit was perfect. Along many other ocean margins, however, no such match is found—for example, along the entire circum-Pacific belt or along the Burma-Indonesian sector of the Indian Ocean. This discrepancy points out a characteristic of continental margins that had been noted by a famous Viennese geologist, Eduard Suess, in the 1880s. He recognized an “Atlantic type” of margin, identified by abrupt truncation of former mountain belts and rifting structures, and a “Pacific type”, marked by parallel cordillera-type mountains, lines of volcanoes, and frequent earthquakes. To many geologists, the Pacific-type coasts appeared to be located where geosynclines are in the process of becoming crumpled and uplifted to create mountains.

In the 1920s, the study of seafloors was advanced when sonar, the echo-sounding device, was modified to measure ocean depths. With sonar, submarine topography could be surveyed and the seafloor mapped. Next, geophysicists adapted the airborne magnetometer so that it would record variations in geomagnetic intensity and orientation. Shipborne magnetometric traverses across the mid-ocean ridges showed that the rocks on one side of the ridge produced a mirror-image geomagnetic pattern of the rocks on the other. Age dating of the basaltic crustal rocks of the seafloor showed that those nearest the ridge were distinctly younger (relatively recent, in fact) than those further away. In addition, no blanket of marine sediment was found at the ridge crest, but it appeared on each side and grew older and thicker with increasing distance from the ridge.

These observations, added to those of the high heat flow, led to the conviction that the ridge is where new ocean crust is being created; it is carried up by convection currents as hot lava, but is rapidly cooled and consolidated on contact with the cold deep-ocean water. To make room for this continual addition of new crust, the plates on each side of the ridge must slowly but constantly move apart. In the North Atlantic, the rate of movement is only about 1 cm (0.4 in) per year, whereas in the Pacific Ocean it amounts to more than 4 cm (2 in) annually. It is these relatively slow rates of movement, driven by thermal convection currents originating deep in the earth’s mantle, that have, over the course of millions of years, been generating the phenomenon of continental drift.

Detailed mapping of the ocean floor was collated in the 1960s and incorporated in physiographic maps in which the submarine landforms were artistically rendered by scientists at Columbia University’s Lamont Geological Observatory. They noticed that the crest of a mid-ocean ridge is in the form of a rift, or cleft, a few kilometres across, that coincides with the ridge centre. They also found that in the Red Sea the rift enters the African continent to become an integral part of the famous Great Rift Valley, which runs from the Jordan Valley and Dead Sea through the Red Sea to Ethiopia and East Africa. Evidently, the rift marks a split in the continental crust, as well as that of the ocean.

The new physiographic maps of the ocean floor also revealed, for the first time, that the crest of the mid-ocean ridge is extensively offset by deep cracks, which have been called fracture zones. These cracks mark the course of transform (“strike-slip”) faults that have developed to accommodate strain generated by uneven rates of seafloor spreading. Although most of these faults are hidden below the ocean, one of them, the earthquake-prone San Andreas Fault, emerges from the Pacific Ocean near San Francisco and crosses hundreds of kilometres of land.

Dynamic problems unique to Pacific-type coasts were recognized as early as the 1930s by American seismologists, who showed that earthquakes associated with these belts are at shallow depths near the outer (ocean) side of volcanic island arcs, but that the depth of seismic shocks increases until it reaches a maximum of about 700 km (430 mi) at a distance of 700 km landward from the front of the arc. By close analysis of a single instance, the American seismologist Hugo Benioff concluded that this geometry represented a fault plane extending through the crust into the upper mantle and inclined downwards, towards land, at an angle of about 45°. A similar underthrusting, of the Southern Alps beneath the Northern Alps, had been proposed in 1906, and in the 1950s the process was named subduction.

The existence of similar subduction planes has now been demonstrated along almost all Pacific-type coasts. (Those where the zone is absent possess geological evidence to show that a zone of this type formerly existed, but that it is simply inactive today.) Most of these belts disclose a major fault system that runs parallel to the general mountain system. At long time intervals, the movement on the fault changes from gradual to abrupt, and a shift of about 1 to 5 m (3 to 15 ft) may be produced by just a single earthquake. Such faults are found in Chile, Alaska, Japan, Taiwan, the Philippines, New Zealand, and Sumatra.

During subduction, ocean crust is constantly being drawn down into the mantle and melted. Because it is continually recycled, no part of the modern ocean crust is more than 200 million years old. Indeed, crustal blocks are constantly moving and jostling as they are carried by the various plates.

An important effect of the melting of subducted ocean crust is the production of new magma. When subducted ocean crust melts, the magma that forms rises upwards from the plane of subduction, deep within the mantle, to erupt on the earth’s surface. Eruption of magma melted by subduction has created long, arc-shaped chains of volcanic islands, such as Japan, the Philippines, and the Aleutians. Where an oceanic tectonic plate is subducted beneath continental crust, the magma produced by subductive melting erupts from volcanoes situated among long, linear mountain chains, such as the Cordillera, up to 100 km inland from the zone of subduction. (The zone itself is located along a submarine trench offshore of the continent.) In addition to creating and feeding continental volcanoes, melting of subducted ocean crust is responsible for the formation of certain kinds of ore deposits of valuable metallic minerals.

With this knowledge of seafloor spreading and subduction zones, all that remained was for the ideas to be combined into an integrated system of geodynamics. In the 1950s, the Canadian geophysicist J. Tuzo Wilson demonstrated the global continuity of the subduction zones, rather like the stitching on a football. The American geologist Harry Hammond Hess argued that if the ocean floor were rifted apart in one part of the globe, the expansion that would result there had to be accommodated by subduction in another part; otherwise the earth would grow larger and larger. Xavier LePichon, a French student of seismology at Lamont, worked out the geometry of the plates from seismic evidence, and the American geophysicist Robert Sinclair Dietz took Wegener’s evidence of continental drift and reconstructed the positions of the continents and oceanic plates in successive stages back in time to about 200 million years ago. Since then, the theory of plate tectonics has been debated, tested, and expanded and has become both a paradigm and a centre of controversy for the geological sciences.